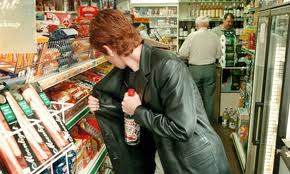 The penalties for retail fraud in Michigan are as follows:

1st Degree – Felony
$1,000 or more stolen; or 2nd degree with prior conviction
2nd Degree – Misdemeanor
Over $200, under $1,000; or 3rd degree with prior conviction
3rd Degree – Misdemeanor
Under $200
This blog will focus on whether a person can be arrested (and convicted) of retail fraud without leaving the store and discuss some trial strategies which our defense attorneys employ when contesting a retail fraud charge.

All larceny and retail fraud crimes require an “intent to steal”

The prosecutor must be prove that a person charged with a larceny or retail fraud crime had an “intent to steal.” Circumstantial evidence may be used to argue the issue of “intent” when the direct facts do not fully show a specific intent to steal. The conduct of the individual may show an intentional concealment of goods when the customer claims that the taking of goods was accidental or non-intentional. What is your opinion of the person in the picture which is inserted at the top of this blog? Intentional or non-intentional? The prosecutor would assert that this behavior is consistent with dishonesty, rather than accidental conduct.

Preparing for a laceny or retail fraud trial

It is the goal of a criminal defense lawyer to advocate facts which support an unintentional taking of goods (accidental or inadvertent). A criminal defense attorney will explore the details of the charge and argue evidence that does not support the element of criminal intent to steal. In some cases video surveillance will be examined and the circumstances surrounding the taking carefully analyzed. Other evidence may include recent purchases by the shopper, past receipts or distractions which existed at the time the shopper took the goods. However, the prior criminal record of a person charged with larceny may be admissible in evidence under certain circumstances by the prosecutor.

Retail Fraud and the 32-A District Court in Harper Woods