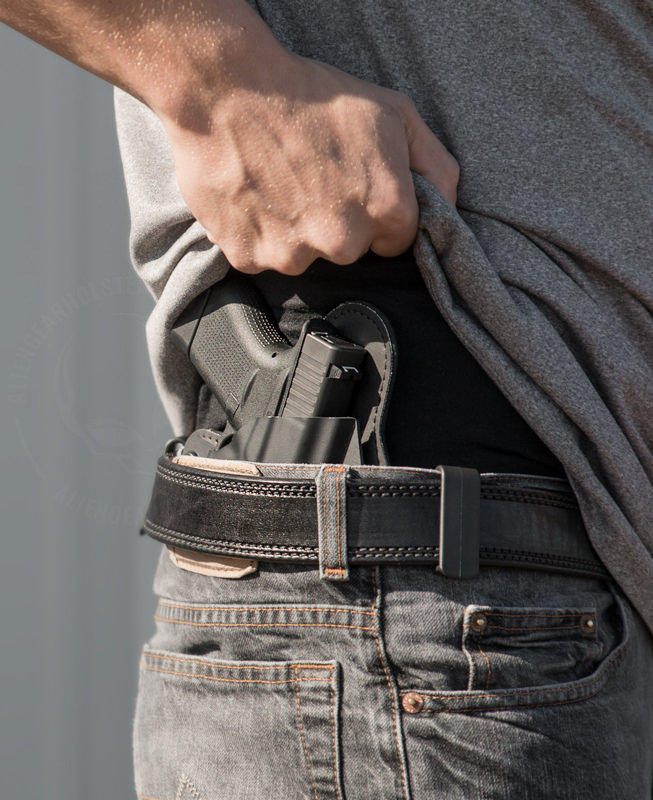 We are living in an unprecedented time. On top of the Covid-19 global pandemic, there are racial tensions, social unrest, unemployment, pandemic lockdown measures, social isolation and tumultuous politics. All of this friction is making people feel nervous, frustrated and afraid. There are conspiracy theories and fears that the election may bring about stricter gun laws. People are arming themselves in record numbers to feel safe.

In the State of Michigan, it is always legal for an individual to keep a firearm at his or her residence and place of business. However, carrying a concealed weapon without a CPL in a motor vehicle, or other place outside of the home or business, is a felony that can carry 5 years in prison. Here are the basic rules in Michigan regarding open and concealed carrying of a firearm:

–Carrying a Concealed Weapon: You may conceal-carry a pistol in a motor vehicle and non-restricted places with a Michigan Concealed Pistol License (CPL) but it is a serious felony to carry a concealed weapon without a CPL.

-Concealed Defined: The carrying of a pistol in a holster or belt outside the clothing is not considered carrying a concealed weapon. However, carrying a pistol under a coat is carrying a concealed weapon. Attorney General Opinion 1945, O-3158. According to the Court of Appeals a weapon is concealed if it is not observed by those casually observing the suspect as people do in the ordinary course and usual associations of life. People v. Reynolds, 38 Mich App. 159 (1970).

–Transporting a pistol without a CPL: You may transport a pistol in a motor vehicle without a CPL if it is being transported for a lawful purpose and according to strict requirements (unloaded, separated from ammo and occupants).

MCL 750.227 is the Michigan Statute which makes it a felony to carry a concealed weapon:  A person shall not carry a pistol concealed on or about his or her person, or, whether concealed or otherwise, in a vehicle operated or occupied by the person, except in his or her dwelling house, place of business, or on other land possessed by the person, without a license to carry the pistol as provided by law and if licensed, shall not carry the pistol in a place or manner inconsistent with any restrictions upon such license. A person who violates this section is guilty of a felony, punishable by imprisonment for not more than 5 years, or by a fine of not more than $2,500.00.

Transporting a Firearm in a Motor Vehicle

Michigan law details how firearms may be transported in a vehicle. MCL 750.227c and MCL 750.227d discuss the transportation of firearms, other than pistols, in vehicles. It is a felony for a person without a CPL to transport a pistol  in a motor vehicle. MCL 750.231.a provides the exceptions to this rule. In general, the statute allows for transportation of a pistol for a lawful purpose which includes going to or from any of the following:

Properly transporting a pistol requires that it be unloaded, kept in closed case designed for firearms, and in the trunk or not be readily accessible to the occupants if the vehicle does not have a trunk. There is no way to “open carry” a pistol in a vehicle. An individual, without a CPL or who transports a pistol in a vehicle without having a lawful purpose as stated above, may be in violation of MCL 750.227, the carrying concealed weapons statute.

According to FBI data, 27 million guns, a record number, were sold in the United States in 2016. According to a CNN article, it expected that the gun sales record of 2016 will be broken before the end of this year. In September alone there was a 61% increase in gun sales from the same month in 2019. Gun retailers and industry analysts say its normal for Americans to stock up on firearms and ammo during an election year. According to the analysts, the surge is motivated by fears that a Democratic president might expand restrictions on gun ownership. But this year’s sales spike is different because it’s being driven by a rise in first-time gun buyers, especially among African Americans and women.  Macomb County is mirroring the national trend with gun and ammunition sales up sharply in 2020 amid the Covid-19 pandemic and other concerns.

Felony conviction precludes possession or ownership of a firearm

CCW is classified as a felony. Pursuant to federal laws, a person convicted of a felony loses Second Amendment rights and cannot own or possess a firearm. Possession of a firearm by a convicted felon carries up to ten (10) years in prison.

If you are charged with CCW in the counties of Macomb, Oakland or Wayne, then you need an experienced criminal defense lawyer for felony representation to help you avoid a felony and retain your Second Amendment rights as is explained in more detail below.

A felony conviction means never being able to own a gun without restoring gun rights after a ten (10) year waiting period. Misdemeanor offenses do not preclude gun ownership or possession. However, most misdemeanor convictions will result in denial of CPL privileges for up to eight (8) years.

The following is a list of common firearm crimes that we are seeing in Metro Detroit (counties of Wayne, Macomb, Oakland and St. Clair):

It is illegal to own or possess a firearm if you get any type of felony conviction. If you have a CPL and get a misdemeanor conviction, you face denial of your CPL privileges for several years.

In 2019, there were a total of 5,810 incidents of felony CCW reported in the State of Michigan and several thousands of other crimes related to firearms. Get a local criminal defense lawyer if you are charged with CCW or any other felony in any city or township in Macomb County, Oakland County or Wayne County.

Depending upon the prior criminal record of the offender and the circumstances of each case, there is a strong possibility of avoiding a felony conviction. Even those with a criminal record, can ask for a deviation to get a felony reduced to a misdemeanor.

In Macomb County, the prosecuting attorney’s office has a protocol in negotiating a felony charge to a misdemeanor or under a special provision of law which can result in a dismissal. The Macomb County Prosecuting Attorney has authority over felony matters in the following courts:

In Wayne County, the prosecuting attorney’s office has a specially assigned attorney known as a “diversion attorney”.  Diversion is a special status which can be assigned to a file that can result in NO entry of guilt and a complete dismissal at the end of a designated period of time. The file is essentially “diverted” from the criminal system.

Please feel free to browse our other publications on the subject of firearms:

Meeting the Eligibility for a CPL, CPL Denial for Select Misdemeanor Convictions & Brandishing a Firearm

MUST READ if you have a CPL: Self-defense, keep yourself sharp, trained and well informed

Contact ABDO LAW if you are faced with any criminal, drunk driving or traffic matter in Macomb, Oakland, Wayne or St. Clair Counties. We offer free consultations, flat-fixed rate fee arrangements and can get your life back on track. Phone: 586-412-5555