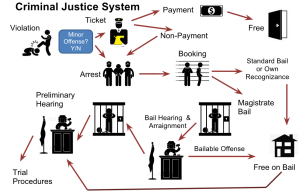 This blog is long overdue. In this blog I will attempt to explain the reasons that make it so difficult to get a domestic violence dropped or dismissed.

First of all, it is important to understand that once a criminal case is pursued, the prosecutor represents the people or public at large for a specific jurisdiction. County Prosecutors have authority to pursue criminal cases on behalf of the “People of Michigan”. City or township prosecutors have authority to prosecute those that are accused of committing ordinance violations within their jurisdiction. Federal criminal cases are prosecuted by the District Attorney’s Office. For this reason, the court title of any criminal case is:

Every criminal case is pursued on behalf of the people within that jurisdiction by the appropriate prosecuting official or city attorney hired by a municipality or township. The victim of a criminal case is not named as the plaintiff or a party to the case. The victim is named as a witness and later can be subpoenaed as a witness to testify against a defendant in a case which is being pursued on behalf of the people.

A domestic violence conviction can label the other party as a violent person which triggers legal entanglements and loss of valuable rights (inability to get a concealed weapons permit, inability to travel across international border to Canada). Unfortunately, getting the case dropped is possible but not easy. Our Macomb County criminal defenses lawyers can better explain every legal scenario and how we have succeeded in getting a dismissal.

Since most domestic violence cases start out with a frantic 911 call when tempers are flaring, the person making the call rarely knows all of the legal ramifications until later. Police involvement is certain following a 911 call. As I stated in another article, the party pressing domestic violence charges may immediately have regrets and want to get it dropped while the police are conducting an investigation or before any court proceedings occur.  Unfortunately, once an arrest is made and the domestic violence case is in the court system, getting it dropped is only possible by court order or by getting a rare deal from the prosecutor to dismiss.

The policy to prosecute those accused of domestic violence/assault is something that has evolved over many years. In my opinion, the issue of domestic violence/assault became a national issue following the Michigan case of People of Michigan vs. Francine Hughes. Ms Hughes was charged with murder after setting her ex-husband’s bedroom on fire in 1977. Her attorney argued self-defense. The jury, who was moved by her circumstances as a battered spouse and the victim of physical violence for several years, found her not guilty. In 1984, the case was profiled in a movie, “The Burning Bed“, starring Farrah Fawcett, which is credited as being influential in the way domestic violence cases are handled.

Now, public policy is a strong factor in the prosecution of domestic violence cases. There are several governmental agencies involved in the criminal process when someone is charged with domestic violence/assault. The government agencies that I am referring to are the police, prosecutor and the judge. Behind the scenes, the government also employs victim’s rights advocates and probation officers. The victim’s rights advocate becomes involved immediately to promote the rights of the victim during a pending criminal case. The probation department becomes involved to make sentence recommendations and monitor a defendant after a guilty plea or guilty verdict. All of these government agencies are usually located within the same building or government complex. All of these government agencies, with the exception of the court/judge, are aligned on the side of law enforcement; not on the side of the accused.

The Role of the Police in Domestic Violence/Assault Cases

Let’s talk about the role of the police, or first responders, to a domestic violence call. Long gone are the days when the police made a domestic call to a residence and let the alleged perpetrator go to the corner bar to cool off. The police can no longer make judgment calls as to who is right and who is wrong when they investigate domestic violence cases. Once an allegation of an assault is made (any intentional touching of another without consent), an arrest will occur. There is no such thing anymore as getting the case dropped on the spot. The reason for this attitude is based upon several valid grounds. First of all, the function of the police is to investigate and report their findings to the prosecutor, not determine guilt or innocence. Second of all, the police fear that a serious injury or death may occur should they fail to take action by removing the alleged suspect from the premises. Lastly, the police face serious criticism and potential liability if they fail to act and a party is later injured or killed. Therefore, public policy favors an arrest and issuance of a “no contact order” as an interim bond condition.

The Role of the Prosecutor in Domestic Violence/Assault Cases

A police investigation will consist of the police report, witness statements, photographs, 911 recording and other evidence. This information will be brought to the attention of the prosecutor for review.  In general, The Macomb County Prosecutor’s Office handles the prosecution of domestic violence and assault crimes which occur in Macomb County. However, in some cases, charges may be pursued as an ordinance violation by a Township or City Attorney.  In either scenario, it is the prosecutor that authorizes the criminal charge against the accused party.

The county prosecutors in Michigan are elected officials. As an elected official, it is in their best interest to show the public that they are tough on crime. Again, the public can be critical in situations when a prosecutor is weak on crime or easily drops cases. For this reason, prosecutors will object to a dismissal motion by defense counsel when a victim a victim fails to appear in court. Some prosecutors will go to great lengths to track down an uncooperative victim. Like the police, the prosecutor’s office needs to avoid scandal and any scenario where someone is injured or killed because of a failure of the system to protect the public. Upon authorizing criminal charges, the case is turned over to the court system for criminal legal proceedings. Misdemeanor domestic violence/assault cases are handled in the district courts. More serious assault crimes may be charged as a felony (assault with a dangerous weapon, strangulation, assault with intent to do great bodily harm, assault with intent to murder).

Once a case is in the court system, a judge is assigned to the case. Judges, like prosecutors, are elected officials in the State of Michigan. The judge’s role in a criminal case is to keep order, control the proceedings make rulings on evidence and answer motions or requests by the parties. In theory, a judge is impartial and does not concern himself or herself with the dispute between the parties. In some cases, a defendant may want the judge to act as the trier of fact without a jury. This is called a waiver trial or bench trial. This would empower the judge, acting alone, to render a verdict of guilty or not guilty without impaneling a jury. However, a person charged with a crime may not have a choice in the matter because either the prosecutor or judge may force a jury trial even when a defendant is willing to waive the same. In my opinion, judges tend to favor jury trials in cases with strong public policy, the presence of the media or where a certain verdict (by a judge without a jury) could subject the court to disapproval.

The Role of a Lawyer in Domestic Violence Cases

If you have been following along, then you should realize:

The scales of justice are heavily weighted in favor of the prosecution in criminal proceedings. Police, prosecutors and judges want to avoid censure, avoid liability and remain popular in the eyes of the public. The jury trial process has its own problems and flaws. The individuals that are called to act a jurors may discriminate and possess biases that can make a fair decision impossible. If this sounds overwhelming and scary, it should. Only an experienced attorney can navigate someone in the criminal justice system and hope for a favorable outcome. A seasoned criminal defense lawyer knows when to work with the system, not against it. For starters, you may need answers to one or more of the following questions:

*It is unethical for an attorney to advise anyone to ignore a court notice or subpoena.

We have written extensively about domestic violence cases and cannot go into detail answering all of the above questions without being repetitious with respect to other articles and blogs on the subject. Please browse through our blogs and articles which discuss various topics in relation to assault and domestic/violence assault crimes: