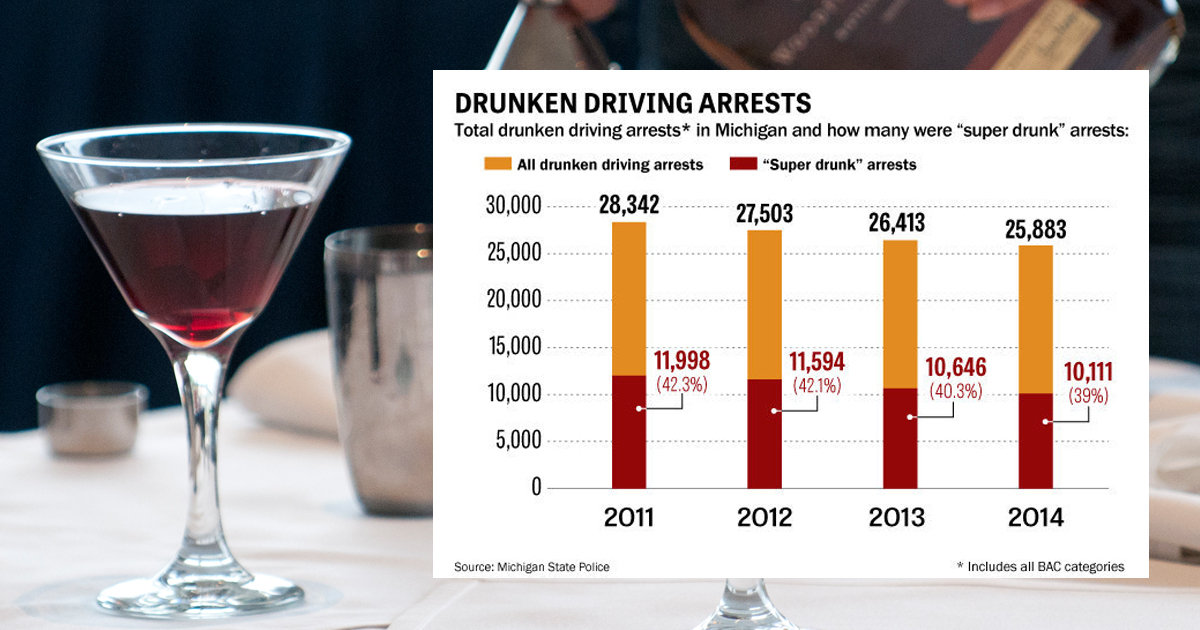 Super Drunk Driving = Operating with a High BAC .17 or Greater

Effective October, 31, 2010, Michigan’s “SUPER DRUNK” law went into effect.  The Super Drunk Law, now on the books for several years, is commonly referred to as ‘operating with a high BAC’ on police and court documents.  This law adds harsher penalties to drunk drivers with high blood alcohol levels of .17% or greater as follows:

Get a Qualified DUI Lawyer that Knows the Law, the Science and Policy of the Prosecutor

Super DUI (.17% or more) or OWI (.08% or more) are presumptive offenses and guilt is based upon the testing results at or above the legal limits. Actual intoxication or impairment does not have to be proven. Getting a qualified DUI attorney the best course of action if you are facing a SUPER DUI. There is more than just the law involved in the handling of these cases. Our Macomb County Lawyers know the law, the science of blood alcohol levels and the policy of the local prosecutors. When the law and science are not in your favor, knowing how to manage a SUPER DUI and obtain plea bargain to a lower charge is our job.
According to the above chart, Super DUI cases account for just less than half of all drinking and driving arrests in Michigan. Here are some key statistics for Macomb County regarding all reported drunk driving cases according to the 2016 Michigan State Police Drunk Driving Audit:

The mandatory requirement of a breathalyzer ignition interlock device (BAIID) device is biggest game changer for drivers charged with a Super DUI.  If convicted of a Super DUI, the BAIID is required for a long period of time (320 days), is expensive and embarrassing to say the very least. The BAIID, similar to a portable breathalyzer, is connected to the ignition system and requires the user to blow a breath sample into a mouthpiece before . This will determine the alcohol concentration level within the body.  If the user’s BAC is .025 or higher, the BAIID equipped vehicle will not start.

An ignition interlock device costs approximately $65.00 to $90.00 per month. Other costs associated with BAIID devices include the installation and removal fees. The Secretary of State has a list of approved BAIID installers.

BAIID problems are quite common which can result in violations that are reported to the Secretary of State. A number of these problems are not the fault of the user but occur because of vehicle electrical/battery glitches and conditions caused by the weather, freezing and condensation.  If you suspect that your BAIID has reported a violation in error, you should obtain a private independent alcohol test to verify that you have not consumed any alcohol. Pursuant to Michigan law, violations are classified as either minor or major violations. Major violations will result in the immediate reinstatement of driver license revocation/denial. You may appeal that action to the Administrative Hearings Section in a timely manner. The following is a list of major violations:

Getting an attorney is your best bet if you have been charged with a Super DUI/Operating with a High BAC of .17 or More!

Our criminal defense attorneys have a winning track record in defending against Super DUI cases.  Initially, we will closely examine the evidence, the validity of the traffic stop and underlying test results to determine if there are any solid legal grounds for dismissal or trial. When a dismissal or trial is not plausible, we have succeeded to get the charge reduced to a lower offense which does not mandate the BAIID device and is much less burdensome in every other respect than a Super DUI conviction. Since Super DUI cases are considered ‘Policy Cases’ in every Metro-Detroit court, a deviation request may be required to obtain approval for a plea bargain to a lower offense. Our firm has been successful in getting the majority of our Macomb County Super DUI cases reduced to a lower offense. *Getting a Super DUI reduced to ‘impaired driving’ is considered a huge victory. We have been able to do this by attacking the police report, attacking the test results, filing a deviation request or by aggressive negotiations with the prosecuting attorney assigned to the case. The following is a list of the district courts located in Macomb County where a positive resolution to a Super DUI charge is feasible:

*There are several benefits when a Super DUI is reduced to impaired driving: driver’s license sanctions are substantially lessened (90 days restricted for impaired instead of 365 days of license sanctions associated with a Super DUI with the BAIID requirement for 320 days), lesser fines, less points and a reduced charge reported to insurance companies and placed on your criminal record.

Links to our other publications on this topic:

Testing for Alcohol and Drugs