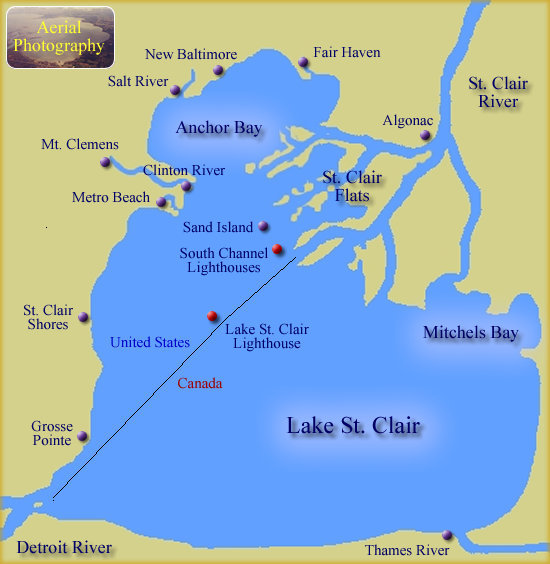 In Michigan, operating a watercraft, including a jet ski, while intoxicated or impaired is a crime. Michigan laws pertaining to Boating under the Influence (BUI) or Boating While Impaired (BWVI) are similar to drunk driving laws which pertain to operation of motor vehicles of public roads. In particular, the State of Michigan has adopted the same blood alcohol content threshold for BUI that has existed for OWI in a motor vehicle (BAC .08%). This publication will focus on Boating Under the Influence (BUI) cases that arise on Lake St. Clair and its tributaries; the St. Clair River and the Detroit River. This publication is based upon the experience of our Macomb County criminal defense attorneys handling BUI cases in all of the jurisdictions that are evident in the above map (Macomb County, St. Clair County and the Grosse Pointe Municipal Courts.

The United States side of Lake St. Clair is policed by the Marine Units of the Macomb County and St. Clair County Sheriffs’ Departments, the United States Coast Guard, the Department of Homeland Security and the Department of Natural Resources. Jurisdiction for crimes which occur on Lake St. Clair or the St. Clair River, such as Boating Under the Influence (BUI),  will depend on the location of the incident in proximity to the shoreline. In Macomb County, BUI cases are prosecuted at the 42-2 District Court located at 35071 23 Mile Road, New Baltimore, Michigan 48047.  For cases in St. Clair County, BUI cases and other watercraft violations are handled at the 72nd District Court at either the Marine City or Port Huron locations. Offenses occurring along the shores of Grosse Pointe are handled in their respective courts.

Boating Under the Influence: BUI depends upon the BAC (Blood Alcohol Content)

Similar to DUI cases that involve motor vehicles, a BUI will depend on whether the person charged is determined to be under the influence. In Michigan, you can be convicted of Boating Under the Influence (BUI), regardless of your intoxication or impairment, if your blood alcohol content (BAC) is at the statutory legal threshold of .08% or greater. BAC is determined by a breath, urine or blood sample.

To learn more about the testing process, we have a publication dedicated to the topic of Chemical Tests for Alcohol, Drugs, BAC.

Penalties for BUI in Michigan: Possible Jail and Loss of Boating Privileges

First Offense Boating Under the Influence

BUI Causing Injury or Death: You can be charged with a felony that carries up to 5 years in prison If you are accused of operating a watercraft under the influence causing an injury to another party. If a BUI causes death, the penalty is increased to a maximum of 15 years in prison and a fine ranging from $2,500 to $10,000.

Contacting an attorney should be your first priority if you are charged with any crime.  Our experienced criminal defense lawyers are available to provide you with complete representation if you are facing a criminal offense that involves the use of a watercraft. Most of the time, the person charged with a watercraft violation is someone who is responsible and does not have a prior criminal record. A BUI is a serious legal matter and there may be ways to fight the case or seek a substantial reduction of the charge with a reduced penalty.