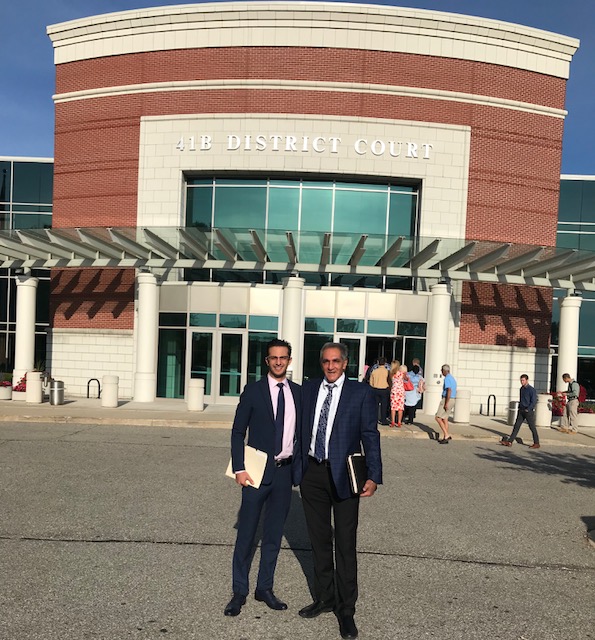 As I state in this publication, it is my opinion based upon several years of experience, that the 41B District Court will give a person a second chance and has a philosophy to encourage rehabilitation rather than impose jail.

41B District Court has an expansive jurisdiction that covers Macomb County from Lake St. Clair in Harrison Township to Hayes Road on the Sterling Heights border, and from 14 Mile Road to Hall Road. The area has a diverse mixture of established and newer real estate, shopping centers, Macomb County Community College, county government offices and the Partridge Creek Mall. The Macomb County Sheriff’s Department and the Clinton Township Police are the predominant law enforcement agencies in the area.

Criminal Cases in the 41B District Court: Provisions of Law to Get Dismissals Available!

Getting out on bond, bond conditions: If you are arrested or arraigned on a criminal matter in the 41B District Court, you will appear either before a magistrate or judge.  Insofar as possible, it is always advisable to have an attorney present for arraignment purposes. An attorney can make a considerable difference at an arraignment hearing by advocating for a personal bond (where no money needs to be posted) or a for a low cash/10% bond arrangement. I have found that the judges and the magistrate will listen to an attorney’s remarks regarding bond which can save potentially thousands of dollars that a bondsman would otherwise take.  In addition to the cash component of bond, the Court can also impose bond conditions upon a person’s release from jail. Drug and alcohol testing are common bond conditions for those charged with any crime involving drugs or alcohol. A ‘no-contact order‘ is assured in assault cases, domestic violence, sex crimes and all other crimes involving a victim. In retail fraud cases, the accused party may be instructed to refrain from entering the establishment where the alleged shoplifting occurred. A motion for a hearing can always be filed to modify bond conditions, remove a no-contact order or eliminate travel restrictions.

The outcome of a criminal case in the 41B District Courts, as well as other Macomb County District Courts, is dependent upon many components.  The most significant factors that can have a bearing on the disposition of a case are:

In our experience, criminal cases can be resolved favorably at the 41B District Court. All these special provisions of law are possible in the 41-B District Court which can result in a dismissal of a criminal matter:

Drunk Driving Cases in the 41B District Court

There are other mandatory and discretionary sanctions associated with a drinking and driving conviction including: driver responsibility fees, probation oversight expenses and vehicle immobilization. The Court can also order installation of an ignition interlock system on any vehicle driven by a person convicted of a drinking and driving offense.

If a person is charged with Super DUI (BAC .17 or greater) a deviation may need to be filed to get a plea bargain to a lower offense. In 2016, there were approximately 140 arrests for operating while intoxicated related offenses in Clinton Township and 50 registered a BAC of .17 or more.

A repeat drinking and driving offender may be looking at a longer period of probation, up to 2 years, with the possibility of some jail time.  There are many steps that we can recommend to those charged with a repeat offense to reduce the likelihood of incarceration in almost every Macomb County District Court.

The 41-B District Court has its own probation department located inside of the courthouse.

Isolated Incidents, Not Likely to Re-offend: There are many instances where we have advocated for ZERO probation, or for an abbreviated period of probation, on behalf of clients that are not likely to re-offend.

Traffic Violations in the 41B District Court: Reduced to Avoid Points and Record of any Conviction!

Like other district courts in Macomb County, I would say that traffic tickets are on the top of the list of types of cases that are litigated at the 41B District Court. Gratiot Avenue, Metro Parkway, a stretch of I-94 and Hall Road all contribute to the traffic volume in the 41B District Court.  When resolving a traffic matter in the 41B District Court, we are often able to negotiate a reduction or avoid points. A substantial reduction in a traffic ticket occurs when it is reduced to an offense such as impeding traffic or double parking. A traffic ticket that is reduced to impeding traffic or double parking does not carry any points and will never appear on a person’s driving record! We are also able to get favorable results for individuals charged with misdemeanor traffic offenses such as driving while suspended, reckless driving and leaving the scene of an accident.

The court staff and judicial officers are forbidden by law to provide you with legal advice. Yet many courts are now making it easier than ever to just pay your traffic ticket by visiting the court’s website and conveniently providing an option to pay by credit card.  Unfortunately, most individuals that receive a traffic ticket do not hire a lawyer and wind up with a record and points that will have an impact on insurance premiums for several years. The path of least resistance, paying the ticket, can be much costlier in the long run.  Another publication by our firm explains why you should fight every traffic ticket.