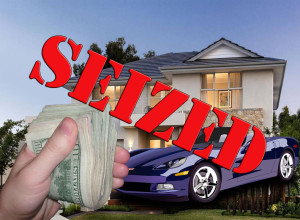 A recent article in the Detroit Free Press says what I have been wanting to say about forfeitures, “Justifiable Seizures Or Legal Shakedowns by the Police?” The article makes several observations:

Macomb, Oakland, Wayne and St. Clair Counties all engage in forfeitures of property which is alleged to be connected to the commission of a crime. Forfeiture or seizure of property is a means by which the government can take the property of an individual that is used in the furtherance of committing a crime or is acquired by the proceeds (cash) from a criminal enterprise. Property from an individual may be forfeited pursuant to Michigan’s civil forfeiture laws even if the person is never charged with a crime. The proceeds derived from forfeited property are turned over to the same police agency that spearheads the forfeiture. The Detroit Free article states that there is an inherent conflict because police agencies profit from the assets they seize.

The federal government and most states passed civil forfeiture laws in the 1980s as a weapon in the war on drugs. Now the laws are used against ordinary citizens charged with minor drug offenses such as possession of marijuana. However, many law makers and former police are now critical of the forfeiture process. Michigan State Representative Jeff Irwin says, “It’s a perversion of our right to due process.” Even a former police officer is critical of the forfeiture laws. According to the Detroit Free Press article, Neill Franklin, a retired Maryland law enforcement officer after 34 years of service, is now an outspoken critic of what he views as the failed war on drugs, and said forfeitures, while once used to bring down major drug traffickers, are now being used to harm ordinary citizens.

An article in the Washington Post, Aggressive police take hundreds of millions of dollars from motorists not charged with crimes, found:

There have been 61,998 cash seizures made on highways and elsewhere since 9/11 without search warrants or indictments through the Equitable Sharing Program, totaling more than $2.5 billion. State and local authorities kept more than $1.7 billion of that while Justice, Homeland Security and other federal agencies received $800 million. Half of the seizures were below $8,800.

Only a sixth of the seizures were legally challenged, in part because of the costs of legal action against the government. But in 41 percent of cases — 4,455 — where there was a challenge, the government agreed to return money. The appeals process took more than a year in 40 percent of those cases and often required owners of the cash to sign agreements not to sue police over the seizures.

Hundreds of state and local departments and drug task forces appear to rely on seized cash, despite a federal ban on the money to pay salaries or otherwise support budgets. The Post found that 298 departments and 210 task forces have seized the equivalent of 20 percent or more of their annual budgets since 2008.

Forfeitures are common when someone is charged with a drug crime. First of all, any property may be seized that constitutes a place or vehicle where drugs are used, sold, stored or transported. In addition, cash or property that is acquired by the profits of drug sales or other criminal enterprise may also be the subject of forfeiture. When property is seized there may be an opportunity to get it back or negotiate a settlement with the police and prosecutor. In many drug forfeiture scenarios, which most defense lawyers refer to as “smash and grabs”, the offender is only caught with a small amount of drugs or marijuana. Typically, the marijuana or drugs is found in a motor vehicle. The police will have the motor vehicle impounded and serve the offender with forfeiture notice. Once the process begins, an attorney can usually negotiate to settle the forfeiture and get the vehicle returned. In addition to the funds necessary to facilitate the settlement with the police, the offender is also responsible for towing and impound (storage) costs.

A motor vehicle may be forfeited when it is used in connection with a drunk driving or solicitation of a prostitute. Those who have face prostitute solicitation charges know that the Detroit Police run an ongoing sting operation where a female police officer works undercover in popular locations where prostitution occurs. When an unsuspecting customer offers money for sex, the motor vehicle is seized and the person is criminally charged with “offer to engage a prostitute”. The police give the offender instructions for the return of the vehicle which ends up costing about $1,000.00 plus towing and impound fees.

A law may seem to be reasonable on its face. But once in place, a law can be oppressive and fraught with abuses. Such is the case with Michigan’s forfeiture laws. I have seen first hand how one can be made to lose everything based upon a minor drug charge. Your first priority when confronted with a police situation is to refrain from making any statements.  An excellent resource on the topic of  your right to remain silent can be found on a Youtube video (DON’T TALK TO THE POLICE) which has had more than 5 million views. A single word such as “no” when denying the commission of a crime can be used to bring criminal charges for lying to a federal agent.  Making a materially false, fictitious, or fraudulent statement or representation can result in criminal felony charges pursuant to 18 UCS 1001. Did you know that Martha Stewart served time in prison for violating 18 USC 1001?

Your next course of action should consist of contacting a criminal defense attorney for legal representation. An experienced criminal defense lawyer can advise you on matters such as cooperation/snitching. As we explain in our blog on the subject of cooperation, the little fish are used to get the big fish.  Other legal  issues during a criminal investigation or forfeiture proceeding may include a polygraph examination. Did you know that an innocent person could fail a polygraph examination?

There are numerous other variables out of your control when the police are out to get you. By the time that you realize that you are being investigated, the police have already gathered records and talked to witnesses.  The investigation is usually kept secret and witnesses are advised to not discuss the investigation with anyone or face criminal charges such as obstruction of justice. I have only mentioned a few situations that can arise in criminal investigations or forfeiture scenarios.