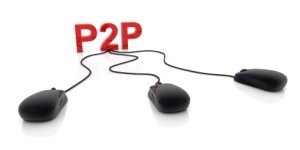 What does Peer to Peer (P2P) Mean?

File sharing sites on the internet allow the access of digital content from other computers connected on a peer to peer (P2P) network. A peer (personal computer user) may copy the contents such as videos, music, photographs or books of a peer (another personal computer).

Some of the risks associated with P2P file sharing are as follows:

Usually, many P2P file sharing programs have inferior security. This can pose a danger for all the contents stored in a hard disk which are exposed to other users. In addition, the computers of P2P users can contract computer viruses because file’s are downloaded from an unknown source. P2P programs may also contain viruses and worms, which prevent users’ computers from functioning properly.

How Does Law Enforcement Know Someone is Involved in File Sharing on P2P Network?

Law enforcement officers conduct surveillance within P2P networks by searching databases for incriminating files. When a P2P user downloads a file, the program places it into a shared folder. In addition, the user may also provide files from a computer to the shared folder for others to obtain. The FBI has a program which allows it to see all of a user’s shared files. The FBI will track an IP address of a computer and eventually obtain the owner’s name and physical location from an Internet Service Provider (ISP). This is followed by a search warrant for computer equipment, electronic storage devices and any other material which may contain illegal content such as child pornography.

The Federal Bureau of Investigation has issued warnings regarding the dangers of P2P activity. The warnings caution users regarding the potential threats of Peer-to-Peer networks, the legal consequences of copyright infringement, illegal pornography and computer hacking. Since P2P networks allow access to anyone, law enforcement agencies at both the federal and state level have become actively involved in searching out cyber criminals or those that may possess or distribute child pornography.  The Macomb County Sheriff Department has a special unit known as MACE (Macomb Area Computer Enforcement) to investigate and gather evidence pertaining to computer crimes. The MACE unit also acts in cooperation with the Oakland County Sheriff’s Department Computer Crimes Unit and the FBI in various investigations.

ABC NEWS: “When “Delete” Does Not Mean Delete”

According to an ABC News story regarding the subject of computer forensics; “Computer files or remnants of such files can be recovered months or even years after they have been downloaded onto a storage medium, deleted, or viewed via the Internet,” Hale wrote in the affidavit. “Even when files have been deleted, they can be recovered months or years later using forensic tools.”

Hale explained that when a person deletes a file on a computer, the data doesn’t actually disappear, but remains on the hard drive until it gets overwritten by new data. The computer’s operating system may also keep records of deleted files in something called a “swap” or “recovery” file.

A computer’s internal hard drive can keep records of how it was used, who used it, and when, Hale wrote. This digital evidence can point to information that once lived on a hard drive or memory stick, but was later altered or deleted. For example, agents might even be able to see where an incriminating paragraph was erased from a word processing document.

“Computer users typically do not erase or delete this evidence, because special software is typically required for that task,” agent Hale wrote.

The trail doesn’t end there. Web browsers, email and chat programs can reveal online nicknames and passwords. The computer can also tell investigators when a memory stick or external hard drive was connected, and how and in what sequence files were created.

A variety of laws contained within United States Code make it a federal crime to advertise, distribute (traffic), produce, transport, receive or possess child pornography. The internet has made child pornography more accessible than at any time in history. A recent study, Child Pornography on the Internet, provides an excellent resource regarding the problems associated with child pornography in the age of electronic transferring and digital imaging. Quoting from the article:

“It is difficult to be precise about the extent of Internet child pornography, but all of the available evidence points to it being a major and growing problem. At any one time there are estimated to be more than one million pornographic images of children on the Internet, with 200 new images posted daily. One offender arrested in the U.K. possessed 450,000 child pornography images. It has been reported that a single child pornography site received a million hits in a month. As noted above, one problem in estimating the number of sites is that many exist only for a brief period before they are shut down, and much of the trade in child pornography takes place at hidden levels of the Internet. It has been estimated that there are between 50,000 and 100,000 pedophiles involved in organized pornography rings around the world, and that one-third of these operate from the United States.

In Michigan, a person that commits a crime at age 17 or older will be charged as a adult. However, an individual that commits a crime at age 16 or less will be charged as a juvenile delinquent. Under certain circumstances, a juvenile can be waived into the adult criminal system. We are seeing an increase in sex crimes (including child pornography) involving juveniles.  In many cases, the juvenile is viewing inappropriate content (pornography) on the internet. This is followed by internet activity which involves the exchange of images or physical activity with others that leads to legal difficulties. In representing juveniles accused of a sex crime, our plan will start out with a psychological profile to rule out predatory conduct and to identify the underlying reasons for the juvenile’s behavior. The court will also look favorably upon those that seek psychological and other professional services to improve the juvenile’s quality of life.

A person may be charged separately for each image that constitutes child pornography, including deleted images which are discovered after forensic analysis.  In addition to the above charges, a separate and distinct offense may be charged for using a computer to commit the crime of child pornography which can carry 4 – 20 years imprisonment pursuant to MCL 750.145d.

Hiring a lawyer should be your first priority, avoid making any incriminating statements or submitting to a polygraph, advancing a strong defense!

If you find yourself in a position where your  Internet Protocol (IP) address has been compromised, you are capable of being tracked by the police or FBI. In Michigan, the Michigan State Police and local law enforcement agencies, such as the Macomb County Sheriff Department, have created task forces to investigate individuals involved in activity related to child pornography.  When the police are hot on the trail of a person involved in recent activity, a search of the person’s premises may occur without any notice. Items related to illegal activity will be seized along with any computers, smart phones and storage devices (portable hard drives, discs, memory sticks and flash drives). Criminal charges may be delayed while the police forensically examine the stored data. The police have the capability to resurrect deleted images and can build a case with a single illegal image. File sharing constitutes distribution and is treated more harshly.

Contacting a lawyer that has experience handling sex-related crimes and computer crimes should be your first priority if you are the subject of an investigation or have been arrested for child pornography or using a computer to commit a crime. Our firm would advise that you exercise your right to remain silent. We also will advance any defenses that may negate intent or support a not guilty verdict such as:

In an interrogation setting, the police have the upper hand to gather details from the accused party. In addition, the police will swiftly schedule a polygraph examination when a person makes a denial of criminal activity. A polygraph measures natural bodily reactions (such as sweating and increased pulse rate) when a person is faced with a stressful situation like trying to cover up a lie.  The accuracy of polygraphs is disputed by many and the results are inadmissible in court proceedings. However, the police will use the polygraph as an opportunity to gather facts and evidence whenever possible. Since it is possible for an innocent person to fail a polygraph, we would never recommend one except after careful analysis on a case-by-case basis.